“We can confirm that the artwork at the end of The Outlaws was an original Banksy, and that Christopher Walken painted over that artwork during the filming of this scene, ultimately destroying it,” a spokesperson for the BBC said.

The show is written and directed by Bristolian comedian Stephen Merchant and is filmed in Bristol.

“The Outlaws, written and directed by Stephen Merchant, stars Hollywood veteran Walken as one of a group of minor criminals refurbishing a building for their community service. The last episode sees his character uncover the Banksy rat and two spray cans behind some wooden boards, and ask his supervisor if he should paint over it. The probation officer is looking the other way so doesn’t realise it’s a Banksy and tells him all graffiti must be painted over, which he does.” https://www.bbc.com/news/entertainment-arts-59236187

After a five-month recess, Banksy is back at it with ten brilliant pieces in Great Yarmouth and Lowestoft, two adjacent towns on the eastern coast, not far from Norwich. The pieces went up around 6 August but were confirmed a week later, on 13 August.

The piece has not yet been confirmed by Banksy’s normal channels, but, it seems to be an authentic one.

Maybe Banksy’s next big project is a book?

There had been some buzz before the piece appeared on the Banksy website http://www.banksy.co.uk on 10 December around 17h. A few hours later it was published on the official instagram account, @banksy.

The Guardian commented the artwork a few hours later:

The owners of a house in Bristol have apparently pulled out of the sale of the property after a Banksy piece appeared on the wall. On Thursday, the anonymous street artist confirmed he was behind the artwork showing an older woman sneezing out her false teeth, which has appeared on a semi-detached house in steep Vale Street, Totterdown. The stencil mural, Aachoo!!”, had been covered up before its unveiling on Thursday morning. It shows a woman in a headscarf holding a handkerchief but dropping her walking stick and handbag as she loses her dentures while sneezing.

Vale Street is England’s steepest residential street – its 22-degree slope used during annual Easter Sunday egg-rolling competitions. ITV News West Country spoke to the owners of the house, which had a sold sign up outside, and were told they have pulled out of the sale. They were due to exchange contracts next week but the artwork could see the value of their house rocket.

Nicholas Makin, whose mother Aileen owns the property, said people had been climbing over the house to get a better look at the new piece. He told ITV News West Country that his mother was distressed by the attention and they will take time to consider what to do next.

Fred Loosmore, 28, a furniture maker who until recently rented a room in the house, told the PA Media news agency he had put a clear covering over it for protection. “We wanted to come up because people will deface it, and luckily we’ve got a workshop and a massive piece of acrylic we’ve got left over,” he said.

“When we lived here so many people would come, especially on bikes and stuff because they were trying to do the challenge up the hills. It’s a great spot. The artwork is so nice. It’s so relevant, isn’t it?”

The piece first appeared on social media on 14 October. After a few days of speculations whether it was done by a local street artist, Banksy confirmed the piece as his on Saturday morning.

The work depicts a girl hula-hooping with a tyre. It seems like the tyre once was part of the slaughtered bike – lock chained at the lamp post beside her.

As always, there are many interpretations to be made. One goes like this: Even if you are suffering from the economy and the pandemic you can find happiness in the little things. Find new uses for obsolete materialism. A simple but powerful advice from stoicism?

According to local residents of Lenton talking to The Guardian, the bike appeared at the scene at the same time as the artwork:

“Surinder Kaur, 42, who runs the beauty salon next to the mural, said the bike had appeared at the same time as the mural. She said within hours the council had rushed to protect the piece by placing clear plastic sheeting over it. Vandals have spray-painted over the plastic two or three times already. Everyone is very excited and many, many people are coming to see the picture,” Kaur said. “Everyone was confused about whether it was real or not real but it’s an amazing picture, it’s amazing art.”

Banksy went back to his origins in Barton Hill for Valentine’s Day. And the girl with the heartshaped balloon is also back, but this time with a slingshot in her hand. 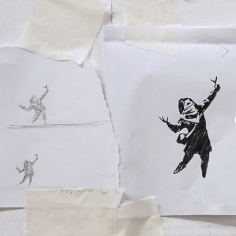 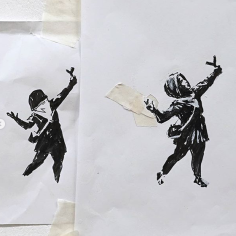 In his own words:

“I’m kind of glad the piece in Barton Hill got vandalised.
The initial sketch was a lot better..”

The new mural is a bittersweet Christmas greeting featuring Ryan, a homeless person, being drawn away by two reindeers. The piece appeared in Birmingham’s Jewellery Quarter last Friday, the 6 December, and was confirmed on Banksy’s Instagram a few days later with a half minute long video.

According to an article published in  The Guardian on 10 December:

“A commuter who happened to pass by on her way to work on Friday morning claims she saw a man setting up close to the wall. She said: “It was around 7 o’clock on Friday morning when I got off the bus and saw a man giving a few snacks to a homeless man who was sitting on the bench. I wouldn’t have thought it was Banksy, I just thought it was someone helping out the homeless.”

Martin Clarke, a jeweller at Vault 88, claims to have seen two workmen early on Friday morning working on the wall which is directly outside his shop. “I saw a small tent with a couple of lads in high-vis vests early in the morning on Friday. I thought they were from the council and were just doing a bit of upkeep. About half six I looked out the window and the tent had gone as had the lads. Then I saw it.

“I thought it was great. We weren’t sure what it was at first or who did it but we had a good idea.”

In Banksy’s own words:

“God bless Birmingham.
In the 20 minutes we filmed Ryan on this bench passers-by gave him a hot drink, two chocolate bars and a lighter – without him ever asking for anything.”

The piece was painted just a few miles away from the Tata steel mill in Port Talbot, southern Wales. Looking at the painting from one angle it depicts a child with a sled, trying to catch the snowflakes with the tongue and hopeful to use the sled if the snowfall continues. The piece was confirmed by Banksy’s Instagram on 19 December. According to several sources, it was painted some days before.

Local councillor, Nigel Thomas Hunt, said in a statement to The Guardian: “We’re buzzing down here. The placing of the work is very clever. You can look at the painting and see the furnaces in the background. We’re delighted. I’ve written to the council already and we need to secure this really quickly.”

The Guardian article continues: “This year, the World Health Organization said Port Talbot was the most polluted place in the UK. But in May, Neath Port Talbot council said the WHO got the figures wrong and had apologised.”

A new piece of street-art appeared today on Banksy’s Instagram and on the official website, http://www.banksy.co.uk. It’s a text-based stencil incorporating a free-hand dick. “Based on your browsing history the following graffiti has been recommended for you…”. The exact location is not confirmed.

It’s a somewhat surprising artistical turn, but, it’s not the first male genital in the Banksy catalog. 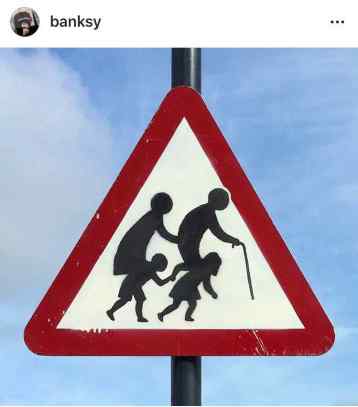 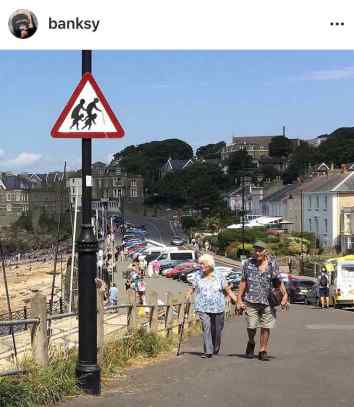